A neurosurgeon’s path from emerald fields to operating room 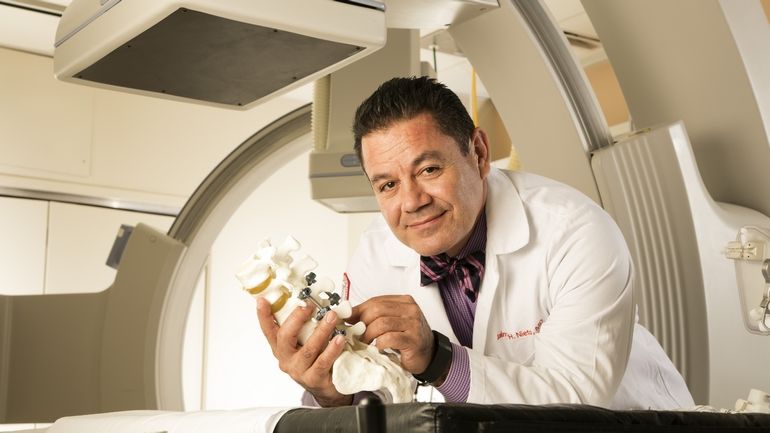 As a Colombian native, Nieto can relate to his patient’s needs and welcomes the challenges and rewards that come with his work.

Dr. Jaime Nieto’s childhood idol wasn’t an athlete or a comic-book superhero. As a boy growing up in the Andean town of Chiquinquirá, Colombia, he most wanted to emulate the local doctor, the only one for 40,000 residents.

“He was the guy who would take out your teeth or your appendix, treat your blood pressure and deliver your babies. He was an icon. He was respected in a way that no one else was,” Nieto recalled.

But Nieto, the youngest of 10, had no clear path to achieve his lifelong “fantasy” to become a doctor. His parents’ education didn’t last beyond grade school, and his mother died when he was 5 years old. Despite graduating from high school in Bogotá with top exam grades, he went to work in the emerald mines in Colombia.

WHOM HE HELPS Nieto’s surgery patients often have spinal tumors or back injuries that require removal of disks.

MOST EXCITING CASE As a surgery resident at UCLA, he helped separate Guatemalan twins who were conjoined at the head.

When he did finally make his way to the United States on a student visa at age 19, he spoke little English. He drove trucks and did construction work to put himself through college. For a time, it didn’t seem like he’d ever get the support or the money he needed to go to medical school.

“If I didn’t have this opportunity,” he said, “I probably wouldn’t be a doctor today—which means I would not have been able to touch 5,000 people’s lives.”

In 2014, underrepresented minorities, including blacks, Hispanics and American Indians, accounted for just 9% of New York’s 73,000 doctors, even though those groups made up 35% of the state’s population, according to the Center for Health Workforce Studies.

Nieto, who heads up neurologic and spine surgery at NewYork-Presbyterian/Queens, said he understands the immigrant experience well.

“About 90% of my patients are Hispanic, and they speak less English than I do,” said Nieto, who became a U.S. citizen in 1995. “These people have to deal with what I used to deal with. For them to come and see me is a big relief. I speak their language and, for the most part, I know their culture.”

Nieto welcomes the challenges, and rewards, of his work. For one recent patient, who had become almost entirely paralyzed, he removed a benign tumor from her spine—with stunning success. “I got the tumor out,” he said, “and she came out walking fine.”

A version of this article appears in the October 31, 2016, print issue of Crain’s New York Business as “Living the dream”.